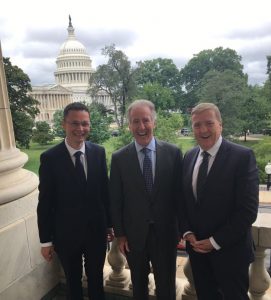 Limerick TD and Minister Patrick O’Donovan said he believes that the relationship between Ireland and the United States continues to be very strong. He was speaking after a series of meetings in Washington DC with members of Congress and representatives of the US State and Treasury Departments.

“Ireland maintains a very special relationship with the United States. This is very clear at every level given the generations of emigration from Ireland. Irish people have contributed across a variety of areas to lead in America. So when we sat down to discuss areas of mutual interest it was clear we were speaking to friends.”

Patrick O’Donovan was in Washington with Clare TD and Minister of State Pat Breen.

Minister O’Donovan said “The Mid West area has a number of very important US employers. With an international airport, deep water port, motorway network, third level education colleges and a strong employment base, it was clear to our American friends that we have a strong and positive story to tell as a region.”

Both Ministers met with Congressional leaders from a number of States including; New York, Massachusetts, Michigan, Alabama, Pennsylvania and California.

“The meetings gave us a chance to discuss a number of issues including Brexit and Trade. We were keen to point out that almost as many American people work for Irish companies in the US as Irish people in American companies in Ireland. We sighted the strong attributes of the Mid West as areas for further US investment and we outlined the Irish Government’s response to Brexit. We also discussed political issues that have potential impacts on trade, commerce and investment and laid out our Governments position”

Patrick O’Donovan said he maintains constant contact with Irish and multinational companies across the region who were glad that the visit had happened. Since returning I’ve spoken to many company representatives who have expressed their support for engagements like this. They have asked me to maintain further and constant contact with representatives of the United States Government on behalf of the people that work for American companies in our region. I’ve committed myself to doing that.”