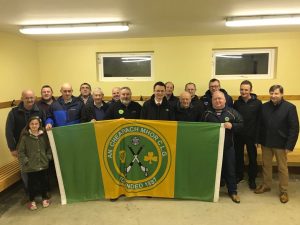 Limerick TD and local Minister Patrick O’Donovan has welcomed the announcement that the Sports Capital and Equipment Programme (SCEP) will reopen to applications on the 11th December.

“The Sports Capital Scheme is funded under Project Ireland 2040 and was reintroduced by me when I was Minister for Sport. These grants can be a major boost, particularly in small rural communities.”

The SCEP is the Government’s primary vehicle for providing support to sports clubs and communities to develop sports infrastructure around the country. Applications can be made online only from 9am on Friday 11th December until 5pm on Friday 12th February, 2021.

“In the last round of SCEP I worked closely with most of the clubs across the County during the application phase of the process and I will again this time round. These clubs and organisations across the County are run by volunteers who put the interests of their clubs and communities first.”

“There is no doubt that this year has been a tough year for many sports clubs and organisations with COVID-19, and this round of the programme will provide clubs with an opportunity to apply for funding to improve their facilities.”

“I would advise any sporting club or organisation that is interested in applying to the SCEP to register if they have not already done so on the Department’s online system at https://www.sportscapitalprogramme.ie. All applications must be made on the same website. The system will be open for applications from 11th December to 12th February, 2021. The “Guide to Making an Application” has also been published on the Department’s website today and can be found here: https://www.gov.ie/sportscapital”. 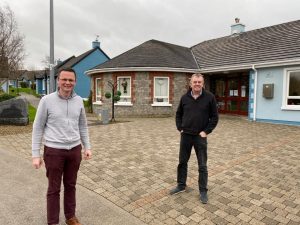 Limerick TD and local Minister Patrick O’Donovan has welcomed a series of announcements that were made by the Government on one day for Broadford, Croom, Hospital, Glin and Pallaskenry. Tánaiste and Minister for Enterprise announced a funding total of €112,651 for Enterprise Centres in Hospital, Broadford and Croom. Minister Heather Humphreys confirmed an allocation of €12,282 for Glin Day-Care for its Meals on Wheel programme and Minister Norma Foley confirmed the next stage in the extension of the Salesian College, Pallaskenry.

“This is great news for communities all across the County and gives further examples of how the Government is investing in rural Ireland. This also is a day which saw significant money across a range of areas including the community and voluntary sector, enterprise and employment and education.”

“As a local Minister here in Limerick I am committed to seeing the maximum amount of investment for the County across a range of areas. Since becoming a TD I have used my place in Government to prioritise infrastructural investment together with allocations for quality of life. I want to use my place as a TD to make Limerick attractive for people to create jobs in and to see their children going to school in, while also strengthening the community and voluntary sector being recognised. I am now in my third Government Department as a Minister and across the County there are locals of examples of where I have been able to work with other Ministers to get investment.”

“But we always need more, so I constantly am in touch with the local authority, Limerick City and County Council and my colleagues in Government to discuss plans that are being put in place while also pushing applications that have already been made. And I will do more of this type of work and I am hopeful for further good news soon.”

Patrick O’Donovan said that the latest round of announcements had been welcomed by each of the applicants and communities where the good news was for. “I know from engaging with communities that there is still a huge amount of positive work going on across the County even though we still have to work in a COVID environment. Every week I use new technologies to meet people across the County and together we are managing to discuss the opportunities for our areas. I know that they are anxious to keep this work going and I will work with them, with the Council and with Government for the local people across Limerick who I know want to see improvements for their communities. 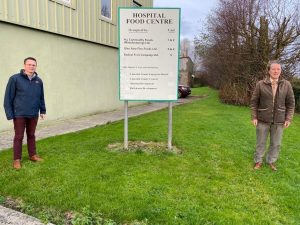 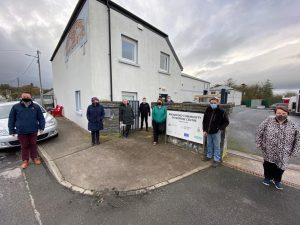 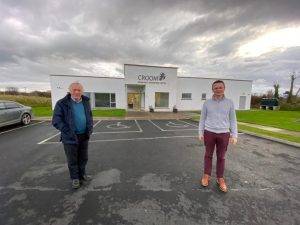 Image 1   Minister Patrick O’Donovan with Cllr. Gerald Mitchell,  at the Ballyhoura Food Centre Hospital, following the announcement of €28,480 in funding toward the centre.

Image 2 Minister Patrick O’Donovan at the  Broadford Community Enterprise Centre following the announcement of €40,000 in funding for the centre.

Image 3 Cllr. Stephen Keary and Minister Patrick O’Donovan at the Croom Enterprise Centre following the announcement of €44,171 in funding towards the Centre from the Government last week. 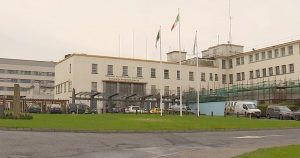 Limerick TD and local Minister Patrick O’Donovan has welcomed the news that the new sixty bed unit at the University Hospital Limerick is to open shortly.

“I’ve been told by the Minister for Health that the new sixty beds, which comprises of three twenty bed wards will open over three dates, 23rd of November, 14th of December and 4th of January. This is really important news for Limerick and the Mid-West. The last Government provided the funding for the construction of the unit, so to have it completed and ready now for opening is really important news for the people of this region.”

Minister O’Donovan said that over a period of time, the Government had been grappling with a number of problems at UHL that date back to the reconfiguration of hospitals in the region including Nenagh, Ennis and St. Johns. This he said had resulted in the provision of a new Emergency Department in the Hospital and the provision of other facilities like this sixty bed unit.

“Over the last number of years within Government, I have been constantly pressing for additional beds within the hospital given the size of the population that the hospital is serving and this will help to alleviate some of the problems in the hospital. However, there is a need to have the planned investment programme in the Hospital continued to be rolled out and this is something that I will work on.”

Patrick O’Donovan also said that the current difficulties that the Country and the Hospital are under as a result of COVID-19 are also adding to the problems in UHL. “Unfortunately some parts of this Region have very high levels of COVID, and are among the highest in the Country. This is having a knock-on impact on the Hospital and its staff, and it shows all of us the importance of listening ton and following the public health advice.” 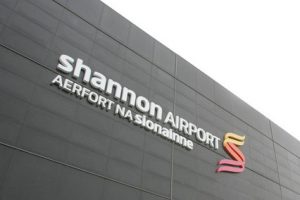 Limerick Minister and local TD, Patrick O’Donovan has welcomed the news that the Government has agreed a revised €80 million funding package for Irish aviation which includes significant financial supports for Shannon Airport.

“The decision taken by the Government today clearly shows the strategic importance the west of Ireland is for this government. The announcement will see €32.1million being allocated under the Regional State Airports Programme for Shannon and Cork Airports, this is an increase of €22.1million on what was announced in Budget 2021. A further €20m has also been allocated under the Airports Charges Rebate Scheme. This scheme is subject to EU Commission approval. The Scheme will see rebates paid to Shannon, Dublin, Cork, Knock, Kerry and Donegal Airports.

“It is essential to have airports ready and maintained for the post COVID-19 world. The Government recognises the importance of Shannon airport and wants to work with local communities and representative organisations. The airport is of massive importance to Mid-West economy and to Limerick. I will continue to work with Minister Hildegarde Naughton at the Department of Transport, whose Department will work out the detail of the additional funding supports with the airport. 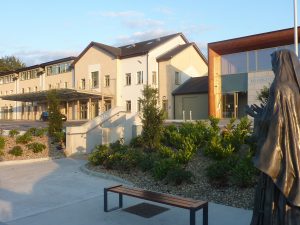 Limerick TD and Local Minister, Patrick O’Donovan has welcomed the announcement that Milford Care Centre, Limerick is to receive €1,250,000 in once-off funding for palliative and end-of-life care in 2020.

The announcement which was made by the Minister for Health, Stephen Donnelly TD and will see €10 million in funding for palliative and end-of-life care service across the country. This once-off funding can be used for improvements to premises, facilities and ICT systems, telehealth and telemedicine platforms, education and training programmes and to offset lost fundraised income as a direct result of restrictions to counter the spread of COVID-19.

“I welcome this very important funding announcement for Milford Care Centre, it will go some way in supplementing their revenue from lost fundraisers during COVID-19. It will assist the Centre to continue to provide its specialist palliative care and older persons services to the people of the Midwest. The Milford Care Centre is a beacon for palliative care in the regional and providing this support is necessary during these challenging times.” 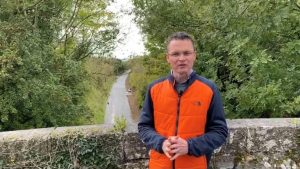 Limerick TD and local Minister Patrick O’Donovan, has announced €10.4million in greenway funding for West Limerick and North Kerry that will ultimately see a distance from Rathkeale to Fenit, Co. Kerry being connected by greenway.

€2.5million is being allocated by the Government from Rathkeale to Listowel via Newcastle West and Abbeyfeale, €4.5million in funding along the Kerry section from Listowel to Tralee and a further €3.4million to take the Greenway from Tralee to Fenit.

“This is an enormous investment by the Government into the Greenway. €10.4million of funding for this project which goes right through from Rathkeale to Tralee and onto Fenit is a massive investment by the State into tourism and recreation in West Limerick and North Kerry.”

“I have been working on this project for many years and to have an investment of this size coming to the area is huge. I know so many people who use the Greenway regularly and everyone says that it really has huge potential in terms of domestic and international tourism.”

“As Minister for Tourism I led the development of the strategy locally with Limerick City and County Council for the Greenway Development and I also held meetings with Kerry County Council to see that side of it progress. So today’s news has been a long time in the making.”

Patrick O’Donovan said he looked forward to the work continuing as Limerick City and County Council had started resurfacing in Rathkeale. “I’ve been working with the Council on the Barna Tunnel and also to get them to acquire the stations in Ardagh and Barna, something which they have made recent progress on. Today’s massive allocation will allow for further improvements to take place on the Greenway both on the Limerick and Kerry sides, and it represents an exciting potential for both counties and for communities all along the Greenway. I am committed to this and as a local Minister and TD I will continue to work and engage with both Councils on it.” 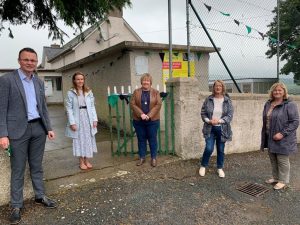 Limerick TD and Minister Patrick O’Donovan has welcomed the allocation of €133,100 to three projects in Co. Limerick under measures 1 and 2 of the CLÁR Programme. Projects in Ballyhahill, Ballylanders and Glenroe have been successful in this round of allocations.

Gerald Griffins GAA in Ballyhahill receive €35,100 for works in the car park, €50,000 is being allocated to Ballylanders for works in the village including public toilets and Glenroe National School which recently reopened will get €48,000 for digital speed signs, footpaths, safety measures and road markings.

“This is latest allocation from the Department of Rural and Community Development under CLÁR and Minister Heather Humphreys TD has said that there will be further allocations.”

“These three projects will make a big difference to the communities concerned. Each one of them is different and I know the allocations will be welcomed locally.”

“I’ve spoken to Minister Humphreys on the importance of the CLÁR Programme and she is very anxious to make sure that there are more announcements like this.”