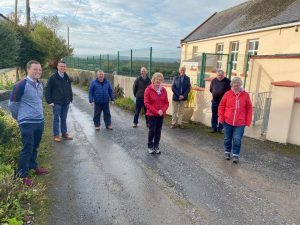 Minister Patrick O’Donovan has announced funding of €87,460 for three communities in Co. Limerick under the Town and Village Renewal Scheme 2020. Projects in Rathkeale, Dromcollogher and Kilmeedy are all to benefit from the grants which have been made by the Department of Rural and Community Development.

“In am delighted to be able to be in a position to announce these. All three communities submitted very worthy projects through Limerick City and County Council, and I worked with all three to ensure that they were successful. In Dromcollogher the local community are developing a meditation garden beside the Parish Church with a labyrinth and water feature. They will receive an allocation of €25,000. Kilmeedy are linking their duck pond and old creamery to the village and funding of €22,500 has been approved and the riverside walkway in Rathkeale is receiving €39,960 with further support committed from Cllr Stephen Keary from his own Council funding.”

“This is very good news from the Government under the Town and Village Scheme. I spoke with Minister Heather Humphreys recently and she is very anxious that more money will also be able to be allocated to other communities in further rounds. Since becoming a Minister, I have been in a position to be able to help communities from across the County to get money like this for a huge number of community projects, and I want to be able to continue to do that. These are projects that I am very proud to be involved with as the local Minister here in the area.”

Patrick O’Donovan said that he was confident that further allocations would be made in the coming months from the Department of Rural and Community Development under the Town and Village, CLÁR and Rural Regeneration Schemes. He added that he continues to work with voluntary and community groups across Co. Limerick and the Council in developing ideas as to how to best access money from the Government.

“Today there is good news for Rathkeale, Kilmeedy and Dromcollogher, but I am sure that there will also be good news for other towns and villages in Limerick shortly.” 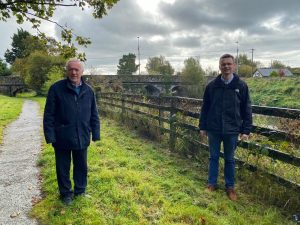 Minister Patrick O’Donovan with Cllr Stephen Keary in Rathkeale which has received €39,960 in funding towards the riverside walkway project. 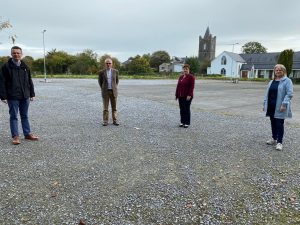 Minister Patrick O’Donovan with Fr. Frank O’Dea, Geraldine O’Sullivan & Eileen Twomey in Dromcollogher following the announcement that they will receive €25,000 towards their project of developing a meditation garden beside the Parish Church with a labyrinth and water feature. 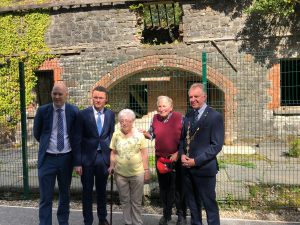 Limerick Minister and local TD, Patrick O’Donovan has welcomed the progress by Limerick City and County Council in developing the old Railway Station House in Ardagh as part of the Greenway. He was speaking after a meeting with the Council and local voluntary groups in the area, where the Council outlined their plans for the old Station House.

“Over a year ago I brought the Council out to Ardagh to meet the local groups in the area and to see what could be done with the Station House. I encouraged the Council’s management to push forward with a plan to include Ardagh in the upgraded Great Southern Greenway. We had a very productive meeting on the day, and Limerick City and County Council engaged with enthusiasm from the start. I held a number of other follow up meetings with them following that, and throughout the process I was able to get Government funding for the overall development of the Greenway.”

“As Minister for Tourism I developed the concept of a national Greenway Strategy and I can see here in Limerick that there is enormous potential for the Greenway to make a really positive contribution to the towns and villages here that it goes through. At the moment resurfacing works are going on which will improve the quality of the surface for users. We also have seen recently the tunnel in Barna being reopened and both of these projects have been funded by the Government through different schemes including rural development and greenway funding.”

“It’s clear from other parts of the Country including Mayo and Waterford that the greenway network has huge potential for rural communities. These are not only amenities for the local area, but also very important for visitors to the area. As Minister for the OPW I recently met with the Council to see how the OPW sites in the area can be maximised for tourism development in Co Limerick and this work in Ardagh will add to that.”

“On a personal level I am very committed to this project. My family came from the railway, my great-grandfather came to Limerick with the old Great Southern and Western Railway, my grandparents had a level crossing in Churchtown, my granduncle was in the station in Newcastle West and my grandaunt was in the station in Barna. My father was born just a few hundred yards away in Ardagh so I have a lot of connections to this project and the wider Greenway and I want to see it prosper and grow in the years ahead, because I believe it will be a major asset to all of Co. Limerick.”

Limerick City and County Council told Patrick O’Donovan that they will now begin a planning process which will be advertised in the local papers and will be open to people to make their submissions. He said that he would work with the local Fine Gael Councillors in the area, Tom Ruddle, John Sheahan and Liam Galvin and thanked them for their support for the project. The Council also said that they are committed to the speedy delivery of the project and will be engaging shortly with the Department.