Limerick Minister and Fine Gael TD Patrick O’Donovan has announced that €15,755,901 in roads funding has been allocated for Limerick in 2020.

“I am delighted to confirm that Limerick is to benefit from €15,755,901 in funding for maintaining and upgrading our roads network. The funding has been made available to Limerick City & County Council as a result of funding secured in Budget 2020.

“I am also delighted to see that the funding has been made available to deliver these projects. These are major pieces of infrastructure that will bring major improvements to our road network here in County Limerick and is further sign of the Government’s commitment to balanced regional development.

“A well developed and maintained road network is vital to ensure safety on our roads but also to ensure that no area of the country is at a disadvantage when it comes to economic development. Fine Gael has committed to improving and maintaining a high-quality road network.”

More information on the full details on Limericks allocation can be found here : 2020NAT_LimerickCityandCoCo 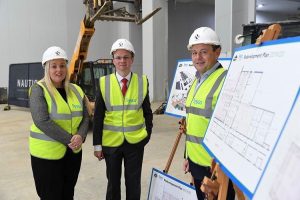 Company, which is part of Sysco Corporation, to invest €2.5mn in development of site

Pallas Foods, a Sysco company, has announced a €2.5mn investment in their facility at Newcastle West, Co. Limerick. In 2018, the company made a commitment to an investment programme at the location, which employs upwards of 300 people across a range of functions.

The development work, which gets underway this month, will involve a complete modernisation of the facility. Alongside renovations of existing structures, a shared services centre to include a customer development kitchen and showrooms, will be created. In addition, a new gym, restaurant and training rooms, will be built for the 300 people currently employed at the site. Planning permission has been granted for the development work by Limerick County Council.

Minister Patrick O’Donovan TD, Minister of State at the Department of Finance and the Department of Public Expenditure and Reform and TD for Limerick County said: “I welcome this commitment by Pallas Foods and Sysco to the community of Newcastle West. Balanced regional development with businesses and jobs located outside the main cities is key to future economic growth in this country. As the local representative for the area, I believe this announcement is evident of the strong role Newcastle West will continue to play in the Pallas Foods business.”

At today’s announcement, Peter Jackson, CEO, Pallas Foods, said: “Today’s announcement is important both to our team here in Limerick and also to the wider Pallas Foods organisation. We are ambitious for the continued growth of our business across the Island of Ireland and Newcastle West has always played an important role in that ambition. The modernisation and development of our facility here will strengthen our ability to service customers ongoing as well as providing an enhanced working environment for current and future employees. This investment of €2.5mn in our facility in Newcastle West will underpin the long-term future of Pallas Foods and Sysco in the town and will bring wider benefits to the local economy.”

Pallas Foods has had an operation in Newcastle West since the 1980s. Estimated completion of the development is February 2020 at a total cost of €2.5mn.
Pallas Foods also recently signed a letting agreement on an 83,000sq ft facility in Little Island, Cork. The Grade A building had been completely revamped and undergone a multimillion-euro investment in advance of the deal with Pallas. 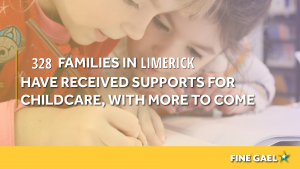 Just three weeks after applications to the National Childcare Scheme opened online, a total of 328 awards have been issued to families in Limerick.

Limerick Minister and Fine Gael TD, Patrick O’Donovan has encouraged all parents in County Limerick to apply directly for subsidies to meet the cost of quality early learning and care and school age childcare at www.ncs.gov.ie

The scheme, under the guidance of Children’s Minister Katherine Zappone, means financial supports can be used with any participating, Tusla registered, early learning and care and school age childcare service, including Tusla registered childminders.

As of December 10th, a total of 478 applications have been received in Limerick from parents, with 328 awards issued. More than 8,000 awards have been issued nationwide in three weeks with applications processing smoothly and quickly.

“Under the National Childcare Scheme, families will be supported to meet the cost of quality early learning and care and school age childcare through a system of universal and income-related subsides. Using a verified MyGovID account, I encourage families to apply directly for subsidies at www.ncs.gov.ie.

“Additional funding provided under Budget 2019 ensures that an estimated 7,500 additional children will benefit from the scheme, with over 40,000 other children, already eligible, seeing increases to their subsidies.

“Income based subsidies are available to families with reckonable household incomes of up to €60,000 which can translate into as much as over €90,000 gross for families in certain specific circumstances,” Minister O’Donovan said.

The National Childcare Scheme is paving the way for Ireland’s childcare system to transform from one of the most expensive in the world into one of the best.

Minister Zappone said: “This is a landmark moment for children and families in Ireland. Through the National Childcare Scheme, families have the first ever statutory entitlement to financial support towards the cost of childcare. The scheme is our pathway to quality, accessible, affordable early learning and care and school age childcare.”

“This is a highly innovative and ambitious scheme and I am delighted that the initial volume of applications has been high. As of December 10, nearly 12,000 applications, relating to over 17,000 children, had already been successfully submitted, and over 8,000 awards had been made to parents.

“There are a range of helpful resources for families on the NCS website, and we have extended the opening hours of the National Childcare Scheme Parent Support Centre from 8pm to 6pm Monday to Saturday,” Minister Zappone said.

An Taoiseach and Fine Gael leader Leo Varadkar said, “The new National Childcare Scheme is about giving our children the best start in life. It’s an investment in making life easier for families, better outcomes for children, and helping to make Ireland one of the best countries in which to grow up and raise a family.

“Families with young children have a lot of pressures – and among these is access to quality childcare that is affordable. The National Childcare Scheme increases the number of families who can access financial assistance. Many families will, for the first time, be entitled to subsidies. Many others will see increases in their subsidies.”