Limerick Minister Patrick O’Donovan has announced that the Minister for Education has allocated the summer works scheme to Ardpatrick, Broadford, Caherelly and Shanagolden National Schools.

“This is great news for these National Schools. They all will be able now to proceed to get ready to carry out works during the summer months. Over the last number of years this scheme has proven to be very popular in order to get improvements to schools across the country. So to have it being continued and be available to school principals to be able to modernise and develop their schools is really welcome.”

Patrick O’Donovan said that this Government has invested heavily in schools across the county since coming to office. “Over the last few years we have seen a huge amount of money invested in the construction of new schools. But we have also seen extensions and refurbishments to schools across Co. Limerick and schemes like this help a lot.”

Patrick O’Donovan said that he has been raising issues on behalf of other Co. Limerick schools with Minister Joe McHugh over the last number of months and he is hopeful of seeing further investment from the Department in the near future. 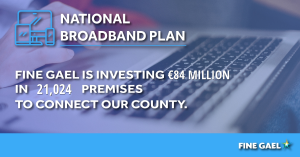 Limerick TD and Minister Patrick O’Donovan has announced that the Government is to invest €84m to deliver high-speed broadband to County Limerick.

Minister O’Donovan was speaking as the Government announced the biggest initiative for rural Ireland since electrification.

“This is a landmark day for County Limerick and for rural Ireland generally. The Government has today (Tue) signed a contract for the National Broadband Plan, which will see investment of €84m to bring high-speed broadband to 21,024 homes across County Limerick.”

The National Broadband Plan is the Government’s plan to rollout high speed broadband to the 1.1 million people living and working in the nearly 540,000 premises nationally, including 100,000 businesses and farms, and over 600 schools, where commercial operators will not commit to deliver the service.

Patrick continued: “The work will start immediately, with roll-out of broadband within eight weeks of today’s contract signing. Over 90% of premises in the State will have access to high speed broadband within four years.

“This means rural communities in County Limerick will not be left behind. All of rural Ireland will get the same access to opportunities offered by high-speed broadband as those in urban areas.

“Fine Gael is delivering on transforming the country for the better and providing more opportunities to all. We have prioritised rural broadband. As an initial step, the Government has published a list of approximately 300 community centres, schools, library hubs and local GAA halls in every county that will be connected to high speed broadband during 2020, to enable communities to quickly get free public access to high speed broadband.

“The ultimate goal here is to deliver high-speed broadband to homes and businesses all across the country. The delivery of high-speed broadband will be hugely beneficial to economic development and job creation in County Limerick. It will open up a whole range of possibilities including: flexible and remote working; smart health with online GP and nursing services and medical monitoring; cloud-based services and connected devices; smart farming opportunities; digital learning; and reliable electronic payments and bookings for businesses.

“We want to ensure that people who wish to live and work in County Limerick are supported in doing so. It is so crucial for balanced regional and rural development. 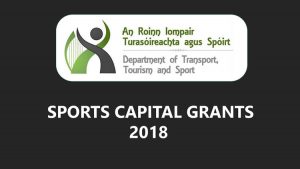 Limerick TD and Minister Patrick O’Donovan has welcomed the delivery of €1.2million to 38 clubs and organisations across Co. Limerick.

“As the local Minister here in Limerick in the Department of Public Expenditure which funds the Sports Capital Scheme I’m delighted to see so much money being delivered across Co. Limerick.”

Patrick O’Donovan said that the allocations were being made to clubs and organisations across the County that are run by volunteers who put the interests of their clubs and communities first.

“I’ve worked closely with most of the clubs across the County during the application phase of the process so to see so much money being allocated is fantastic.”

The Sports Capital Scheme is funded under Project Ireland 2040 by the Department of Public Expenditure and Reform and was reintroduced by Patrick O’Donovan when he was Minister for Sport.

These grants will be used in a range of projects across the County and can be drawn down from the Department once the clubs receive their confirmation letters.

Patrick O’Donovan added “These grants will be a major boost, particularly in small rural communities. In many cases the clubs would not be able to raise the funds that have been awarded and that makes these grants even more positive. I look forward to seeing the work now progressing and to see more money of this nature being invested in communities across Limerick by Fine Gael in Government.”