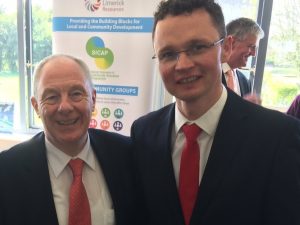 Limerick TD and Minister Patrick O’Donovan has expressed his delight with the news that County Limerick is to receive €585,100 in Government funding from Minister Michael Ring’s Department, the Department of Rural and Community Development under the 2019 Town and Village Renewal Scheme.

Projects in Askeaton, Ballingarry, Broadford, Dromcollogher, Kilteely and Murroe Boher are all to benefit from the scheme.

“This is great news for rural Co. Limerick. These projects have been developed in conjunction with Limerick City and County Council and the local communities. I know from working with volunteers across Co Limerick what funding like this means to the areas concerned. This injection is just one of a number we have made as a Government into rural Limerick.”

“As the local Minister and TD I am committed to getting our fair share for Co Limerick and today’s investment is just another example of that.”

Grants have been awarded to the following projects in County Limerick:

Askeaton –  Create a pedestrian friendly Town Centre in the centre of Askeaton €200,000.00

Murroe Boher –  Complete the second phase of multi-access walkway at Murroe Town Park and install public lighting along the new section of the track €70,879.20

Broadford – Refurbish existing Parish Hall built in 1870 to develop a Community Centre in the village €99,911.20

Dromcollogher –  Create a village heritage trail and carry out improvements to the Town Park €86,397.60

Ballingarry –  First phase of the reimaging and branding of Ballingarry as ‘The Garden Town’ €79,604.00 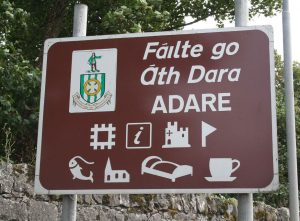 Limerick’s Minister Patrick O’Donovan has said that he expects the Government to give the green light to the next stage of the new Limerick to Foynes road, which includes a bypass of Adare, at today’s Cabinet Meeting.

“As Minister in the Department of Public Expenditure and Reform, which is the key Department in the delivery of large-scale projects of this nature, I have been pushing for progress on this road. I insisted that it should be included, and it was included, in Project Ireland 2040 when my Department published the National Development Plan, together with the list of projects that would be going ahead.”

“I have been working on this as a Government TD for Co. Limerick since 2011 when I was first elected to the Dáil. In that time, I brought former Transport Ministers, Leo Varadkar and Paschal Donohoe to Limerick to show them the need for the road project to be advanced. Since then I’ve used my position as a Minister in both the Departments of Transport and Public Expenditure to push this forward, and this decision is another big step.”

Patrick O’Donovan thanked both the Taoiseach and the Minister for Public Expenditure, who he said have been critical to moving the process forward to this stage.

Limerick City and County Council will receive approval from the Government to go ahead and lodge the planning application to An Bord Pleannála, which Minister O’Donovan pointed out is an independent statutory process.

“Agreeing to move the project to this stage is hugely important as it sends a very clear signal that once the planning process is concluded, this Government led by Fine Gael, is committed to the project. We are the first Government that have clearly laid out the importance of linking the deep-water port at Foynes to the national motorway network, while also providing a bypass of Adare are clear national priorities for us, so moving it forward is very significant.”

“Getting this project to this step is a very important milestone for me and getting the Government to this stage is vital. I look forward now to the Limerick to Foynes project progressing to enter the independent planning process, which I hope will give clarity, and when completed we will finally see a start on this road.” 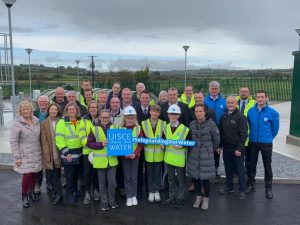 After years of waiting and several disappointments, the Athea wastewater treatment plant has been finally officially opened by local Minister, Patrick O’Donovan TD.

“For years the need for an upgrade of the Athea sewage plant was the dominant issue in the area. I remember as a Councillor attending meetings where the local community spelt out that they wanted this upgrade provided. So, on being elected as a TD I made this one of my priorities. I engaged with former Minister, now EU Commissioner, Phil Hogan and others, to try to get this project advanced. I succeeded in getting it approved and put out to tender and now it’s completed.”

“I’m delighted to be able to officially open the plant, which is a huge investment by the Government in Athea. This plant will allow new houses to be constructed in the village, something the residents and voluntary groups, including the Community Council, all wanted. For the future development of the village to be assisted, this plant had to go ahead, and that’s why I’m delighted to have been able to deliver it.”

Minister O’Donovan thanked the local community, the contractors, Irish Water and everyone associated with the delivery of the plant. He said it represented a major investment by the Government in Athea, and together with schemes like the Sports Capital Programme, Town and Village Renewal and other funds, showed Fine Gael’s commitment to the area.

“I’m often criticised by some outside Limerick for using my position in Government to deliver locally. I’m going to continue to do that, regardless of criticism and I’ll use every avenue available to me to get projects like this one in Athea over the line.” 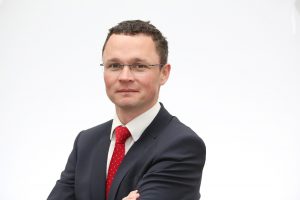 Minister for Health Simon Harris has said he will make another unannounced visit to the University Hospital Limerick in the coming weeks.

The Minister has also agreed to meet with all Oireachtas members from the Mid-West to discuss current problems facing the Limerick hospital, following a meeting the Minister of State Patrick O’Donovan.

In the course of their discussions on the hospital, the Minster of State at the Department of Finance and the Department of Public Expenditure and Reform, also raised serious concerns about high trolley numbers at the hospitals ED, delayed discharges and the unacceptable waiting list for MRI scans, with the health minister.

Following their meeting Minister O’Donovan said, “Minister Harris agreed to examine options relating to the wait for MRI scans including options such as using equipment in private hospitals; a mobile unit that can be brought in temporarily, and the long-term option of purchasing and installing a second scanner for the hospital.”

“One of the biggest issues facing University Hospital Limerick is the unacceptably high number of trolleys in the Emergency Department, and the sustained upward growth of delayed transfer of care which of course is unacceptable for patients and adding to the trolley issue,” said the County Limerick minister of state.

“In my opinion there is a growing demand for community social care measures such as long-term residential care, home support and transitional care to support discharge from Limerick Hospital.

“The Minister of Health has agreed to examine the current use of Nenagh, Ennis and St John’s hospitals to ensure they are being used to maximum potential, while also taking on board the need for extra funding for Mid-West social care – to include home help, transitional funding, and fair deal. He said this is one of his budget priorities and I remain hopeful of positive news,” added Minister O’Donovan.

“Frontline staff are of course key to a good health service, and we discussed the need for extra nurses. The HSE have recruited over 40 student nurses in last five weeks, which is progress in the area of staffing needs.

“The minister is to meet with all Oireachtas members and has also agreed to meet the clinical team from UHL with me at a time to be agreed. In the meantime, Minister Harris plans to carry out another unannounced visit to the hospital in coming weeks to see first-hand how the hospital is working and where improvements still need to be made,” he said.

“Meanwhile progress is been made on the Modular Unit. The main contractor is commencing work on the modular 60-bed inpatient ward block at the hospital. The enabling works are complete on the project and a capital budget of €19.5 million has been approved for the work, of which €10 million has been allocated this year. An additional 25 beds have also opened since 2017 at UHL, including eight as part of the 2018/2019 Winter Plan.”

Minister Patrick O’Donovan compares Fianna Fáil’s promises of reckless spending to an out of control taxi metre, clocking up a million euros an hour 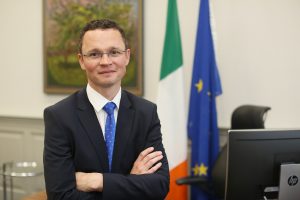 Minister Patrick O’Donovan compares Fianna Fáil’s promises of reckless spending to an out of control taxi metre, clocking up a million euros an hour.

The Minster of State at the. Department of Finance and the Department of Public Expenditure and Reform Patrick O’Donovan has compared Fianna Fáil’s “reckless expenditure promises” to an “out of control taxi metre, clocking up a million euros an hour.”

Minister O’Donovan said, “Fianna Fáil continues to make calls for more spending without any plan on how to foot the bill. My Fine Gael colleague Deputy Peter Burke, a chartered accountant by trade, compiled a report into spending calls from Fianna Fáil during the first half of 2019. His findings showed promises and demands by Fianna Fáil totalling a massive €4.35 billion in the first six month alone.

“With just €700 million available for extra spending next year, I would strongly urge Deputy Michéal Martin and his party to explain where they plan to find the extra funding to finance their fantasy budget.”

“It seems they either cannot or will not explain how they plan to fund the €24 million extra they promised to pay out every day,” said the County Limerick Minister of State.

Minister O’Donovan asked, “Are they going to increase taxes? Are they going to cut spending in other areas, and if so which particular service is to pay the price of their electioneering? Or are they to return to old form and borrow more money on top of the debt from the last time they were in Government? There is certainly no plan in place for debt reduction if these series of unvouched promises are to be taken at their word.”

“Fianna Fáil has one plan it seems and one plan only. To run up our national debt at a million euro an hour, like an out of control taxi metre. And if this is not the case, then I for one would like to know how they plan to fund €4.35 billion in extra spending over six months – or is that €9 billion over one year? Who knows – the Fianna Fáil maths don’t add up.”