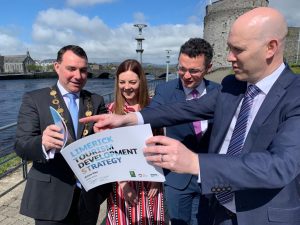 When I was Minister for Tourism I developed the Local Authority Tourism Strategy, and I was delighted to join my own Council, Limerick City & County Council for their own launch today.

Limerick Tourism Development Strategy 2019 – 2023 has identified Limerick’s unique position on the west coast of Ireland and as a gateway to the Wild Atlantic Way as central to developing the sector. It envisages that the total number of visitors to Limerick will reach 1.1 million per annum, generating more than €360 million in revenue and creating 1,500 new jobs by 2023.

For more information please on the following link:  https://www.limerick.ie/council/newsroom/news/untapping-limericks-potential-tourism-destination-can-lead-creation-1500-jobs

Limerick TD and local Minister Patrick O’Donovan has this morning announced €234,000 in funding for flood relief works on Marine Cove Road in Foynes.

“I have been working with Minister Kevin ‘Boxer’ Moran on a number of flood related issues in Foynes and I am delighted to have been able to secure this funding for the Marine Cove area. The allocation will allow for works that will channel the water away from the road to the river.”

Minister O’Donovan confirmed that he is continuing to work with Minister Moran on securing further funding from the Office of Public Works for works in Foynes and the Shannon Estuary area.

€111,000 for improvement and safety works at Glin Pier 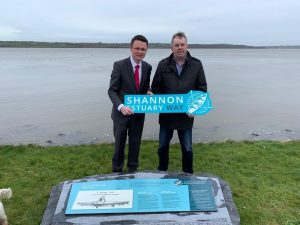 Limerick Minister Patrick O’Donovan TD and Councillor John Sheahan have this morning welcomed the announcement by the Minister of Agriculture Food & Marine, Michael Creed TD that he has allocated €111,000 to Limerick City & County Council for Glin Pier for improvement and safety works.

The announcement this morning is made under the Department of Agriculture, Food and the Marines’ 2019 Fishery Harbour and Coastal Infrastructure Development Programme, in which a €2.2m package has been announced to assist 12 Coastal Local Authorities undertake and complete 39 development and repair projects on harbours and slipways owned by them.

Patrick O’Donovan in welcoming the announcement said “that this is funding will go a long way towards the modernisation and improving safety on the pier. It is a welcome announcement which will benefit the community and many visitors to the area”.

Cllr John Sheahan said that he as the local councillor is “delighted that the application was successful and it is great news for Glin. This is part of an ongoing programme in the restoration of piers in the county. These essential works when completed will no doubt enhance the works already carried out on the pier”.

Both Patrick and John have worked on securing funding for Glin Pier over the last number of years and this funding announced this morning follows €30,000 in funding that was previously granted for resurfacing at the pier.