€763,000 in funding for investment in rural water schemes in Limerick – O’Donovan

Minister of State Patrick O’Donovan has welcomed the announcement of €763,000 in funding for investment in rural water schemes in Limerick.

The allocation was made by the Minister for Housing, Planning and Local Government Eoghan Murphy as part of a €20million investment nationally.

Minister O’Donovan said “This investment by the Government is very important for the communities concerned. Provision of good quality water is a priority and this allocation which is being made to Limerick City and County Council will be an important part of that objective.”

“As a rural TD I am constantly advocating for investment in our rural infrastructure including our water network and I will continue to do that with my Government colleagues on behalf of the constituency here in Limerick County.” 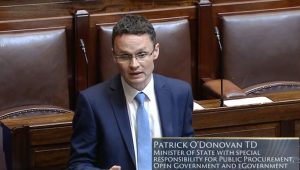 Limerick TD Patrick O’Donovan, has spoken of his resolve to continue to work and deliver for Limerick, as the Dáil reconvenes.

Speaking ahead of the first sitting of the new Dáil term Minister O’Donovan said the main focus of the government was to deliver a balanced and fair budget.

The Minister also cited the upcoming Brexit negotiations as a major priority, while praising the progress already made.

He said: “I, along with my colleagues in Fine Gael, am committed to improving the daily lives of everyone on the island of Ireland”.

“I am determined to deliver for the people of Limerick”

“And today I am delighted to announce the allocation of €63,320.80, by Minister Michael Ring, to six major rural recreation projects across Limerick.

“As I have said many times before reducing the threat posed by Brexit is also top of my agenda. While we are facing into unchartered territory in terms of Brexit, Limerick people can rest assured, I am fighting for their best interests, every day.

“We have already made progress in key areas, including taking the lowest paid out of the income tax net.”

“Housing remains a major issue for this government; we have made positive advances in Limerick.”

“While the next six months ahead will be among the busiest faced by many of us in government there is much to be positive about.”

“We are committed to ensuring that middle income earners will take home more of their hard-earned pay.”

“We are committed to easing the burden on working families through continuing the work we started on childcare, early education and the introduction of childcare subsidies, pre-school and paternity benefit.”

“As we enter the new sitting of the Dáil I look forward to serving all the people of the Mid-West Region.”

“I’m working towards more and more people feeling the recovery.”

Minister positive ahead of Dáil return and upcoming budget 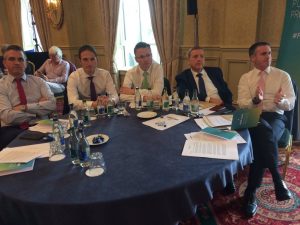 Limerick TD Patrick O’Donovan, has spoken of his determination and commitment to best serve his constituents, ahead of the reconvening of the Dail. Speaking at the Fine Gael think in, in Galway today Minister O’Donovan said the main focus of the government was to deliver a balanced and fair budget. He also praised major progress in relation to housing in Limerick since the beginning of 2017.

He said: “Taoiseach Leo Varadkar made it clear, Fine Gael are committed to improving living standards. We as a government have already taken the lowest paid out of the income tax net altogether, now we will ensure that middle income earners will take home more of their hard-earned pay. As I have said many times before a major priority for me is reducing the threat posed by Brexit on the agricultural sector. As we saw last week there has been major advances regarding the Fair Deal Scheme.”

“I am delighted to reveal that since the beginning of 2017 there has been 746 newly built homes completed in Limerick. The number of new homes granted planning permission in Limerick, in the same period is 774. In the same period, 923 households have been supported through HAP and RAS. We have also made great strides in terms of the provision of social housing in the period of 2017 and the first quarter of 2018.”

“In total 317 new social housing homes have been delivered through, build, acquisition and long term leasing in Limerick. There are currently 66 social houses on site in Limerick and a further 653 social houses going through the various states of approval. I want the people of my region to know I am working tirelessly with colleagues to get the best possible deal for them.”

“While there is much to be positive about I was particularly pleased that the difference in the rate of income tax paid by those on average incomes was acknowledged. More balance is needed. Progress has been made, with the introduction of childcare subsidies, pre-school and paternity benefit. The Taoiseach also acknowledged the need to reduce the cost of childcare for more families.”

“As we enter the new sitting of the Dail I look forward to serving all the people of the Mid-West Region. I’m working towards more and more people feeling the recovery.” 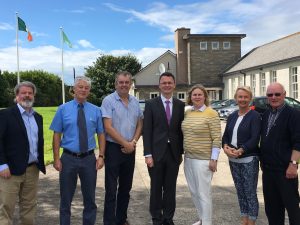 Limerick TD and Minister, Patrick O’Donovan has announced that St. Fergus’ National School in Glin has been approved €50,000 in funding under the CLÁR programme. This funding will go towards the construction of a new carpark and drop off area on the school grounds and adjacent to the public road. This will allow parents to safely drop off and pick up their children in the mornings and the evenings.

“I worked very closely with local Councillor John Sheahan, the School Principal, Board of Management and Minister Michael Ring in order to get this project approved. This is a very welcome announcement for the school, pupils and the local community, as it will allow for safer travel to and from the school. I am very proud to be able to deliver this for Glin.”

“Over the last number of years the Government have invested significant sums of money in a number of rural development schemes. One of these is the CLÁR Programme which supports communities under a range of different headings. During that time I have worked closely with my colleague Minister Michael Ring, to secure the maximum amount of funding for County Limerick. This project in Glin joins a long list of successful applications that have been awarded funding from the Department.”